There are many NGO-s (non-governmental organizations) and humanitarian organizations in Serbia today, but the Sveti Sava Society is the only one that has its roots in 19 th century. There are many societies and clubs bearing the name of Sveti Sava, but this one is more than one hundred years old. In 1993, a group of Serbian intellectuals – professors, historians, literates, journalists, lawyers, artists, diplomats, physicians as well as some members of the Serbian Academy of Sciences and Arts (SANU), decided to revive the old and well-respected Society of Sveti Sava, founded in 1886 and suspended in 1941. After almost a year of preparatory work, the Assembly of renewal took place in the National Library of Serbia in 1994. It had a symbolic venue: in the Vračar area, next to the Temple of Sveti Sava and near the place where Sinan Pasha burned the remains of the Serbian Saint. More than 80 participants agreed to work in the national interest, by promoting cultural and educational values, publishing and cherishing the tradition of the Old Society and the spirit of Sveti Sava.

The Old Society of Sveti Sava was founded in Belgrade in 1886 with the main objective “to propagate education and enlightenment and to cherish the national feeling of chastity in the Serbian nation”. Its founders were Serb patriots, intellectuals, well-respected businessmen, representatives of different political parties. Its first president was Mr. Svetomir Nikolajević , professor of general history and literature in the Grand School (Velika škola) and member of the Serbian Royal Academy (today’s SANU).

In this very short period, the Society of Sveti Sava organized a structure of subcommittees all around Serbia. Important financial means were engaged to support the three main activities: cultural and educational work on the grass roots level, publishing, granting scholarships or founding school institutions for the education of Diaspora cadres who afterwards returned to their communities, mainly in Old Serbia (parts of Kosovo and today’s FYROM) and Macedonia, but also in Bosnia and parts of the Austro-Hungarian Empire.

Helping Serbs outside Serbia implied support for Serbian schools and churches in regions under Turkish and foreign rule, by sending books, manuals and maps and other cultural material and equipment. The goal was to promote national awareness and cultural identity, the use of the national language and traditional customs, in order to preserve Serbian communities and to fight foreign culture and influence, especially Bulgarian and Turkish politics in Old Serbia and Macedonia.

Many youngsters from those regions become teachers or priests or even artisans in Serbia and then went back to propagate Serbian thinking in the Diaspora. From 1887 to 1912 more than 20 thousand Serbian children from occupied territories attended schools and courses in Serbian schools, hosted by the Society of Sveti Sava.

The Society of Sveti Sava developed its own publishing, which included, among other, the publication of the review Brotherhood (Bratstvo) with different articles from the historical past or about contemporary life of Serbs in Serbia. The most important Serbian researchers, literates or experts wrote most of the articles. Stojan Novaković, Milan Đ. Milićević, Ljubomir Kovačević, Milojko Veselinović, Jovan Hadži-Vasiljević were authors of some of the articles published by Bratstvo. According to researchers, Bratstvo found its readers not only in Serbia and territories under Turkish rule, but also in Gratz (Austria), Banja Luka, and Kotor.

Such broad activity in Serbian communities eventually created cultural ground for the unification of Serbian territories after the Balkan wars and, especially, after the First World War. It was financially supported by the Serbian Government (Ministries of Foreign Affairs and of Education and religious works gave important amounts to the Society’s funds) and by many of well-to-do individuals. The young king Aleksandar (Obrenovi ć ), businessman Djordje Weifert, the old queen Natalija, owners of different Serbian factories, Jewish communities and individuals, ministers, clergymen, public servants, considered it their patriotic duty to financially support the Society and its activities. Many people dedicated their foundations to the Society.

Such support resulted in important property – two big buildings in Dušanova Street in Belgrade, several housing lots in downtown Belgrade, and even some real estate in Sarajevo.
In the Kingdom of Yugoslavia, the Society of Sveti Sava had a somewhat different but still very important cultural and educational activity.

All of this fertile activity was suddenly interrupted in April 1941, when the first German bombs fell on Belgrade. The German occupation was not an appropriate environment for Serbian culture and education. Difficult times continued in communist Yugoslavia and nobody dared even to consider working on the resurrection of the Society.

The disintegration of Yugoslavia in 1991-92 brought again into focus the problem of national survival of Serbs outside of Serbia, especially in Croatia and Bosnia outside of the Republic of Srpska. It was the right time to think again about the merits and goals of the Society of Sveti Sava. Mr. Mladen Gavrilovic, a retired journalist of the Tanjug News Agency, former foreign correspondent from London, Athens and Cairo, and – the grand son of the late Mr. Jovan Hadži-Vasiljević, a prominent member and former Secretary General of the Old Society of Sveti Sava, was a unifying force pulling all necessary pieces together. Among others, Ms. Snezana Nikolajević, the grand granddaughter of Mr. Svetomir Nikolajević, the first President, took part in the renewal of the Society. This personal note was also very important to the new-old Society because it was a sort of guarantee that its tradition will be continued.

The first elected President in 1994 was Mr. Mihailo Mladenović, an attorney in at law and the president of the Royalist Party of Serbia. Mr. Jovan Pečenović, former Ambassador and Assistant to the Minister of Foreign Affairs, Professor dr. Mihailo Vojvodić, and former Dean of Faculty of Philosophy and Professor dr. Alexandar Milošević, former chief of Department of Cardiology on Military Medical Academy followed.

The Sveti Sava Society started a new stage of its activity in a very difficult period for the Serbian nation. Wars in Croatia and Bosnia, the surge of refugees in Serbia, UN economical embargo, secession of Kosovo and Metohija, the NATO aggression and bombing of Serbia brought the country to a very difficult position. The needs of Serbs in the motherland and in the former Yugoslav republics were very profuse and, on the other hand, the society’s material and financial resources were very scarce.

Unlike the Old Society, the present Society has no stable resources to fulfill its traditional mission. For example, it is not able to offer scholarships to young refugees or to provide books and other necessary material to students and other people in need of education. The organization of subcommittees is also very slow, due to the lack of funds.

Despite this uncomfortable financial situation, the Society managed to do a lot, thanks to the enthusiasm and volunteering of its members. Every year (and 2004 already marks the first decade of renewed activity) a series of lectures were organized. The subject of these lectures was the promotion of the spirit of St. Sava (Svetosavski duh) which implies not only culture, historical tradition and education, but also the art of mutual understanding, the ability of conducting a dialogue, methods of peaceful resolution of problems and humanitarian activity to help those in need.

Prominent Serbian intellectuals took part in these lectures, very popular in Belgrade. This spring, for example, a series of lectures was dedicated to the two hundredth anniversary of the Serbian democratic revolution and of our political, cultural and economic history. Six lectures comprised not only of dissertations on Serbian cultural and historical heritage but also traditonal art brought by ethno groups, singers, poets, and even “gusle”, an old and popular Serbian musical instrument.

Among others, our famous historians, professors Dragoljub Zivojinovic and Ljubodrag Dimic, the well known ethnographer prof. dr. Petar Vlahovic, a member of the Montenegrin Academy of Sciences and Arts (CANU), the distinguished professor Dimitrije Golemovi ć , specialist for ethno music, took part in the series.

Another popular activity of the Sveti Sava Society is a traditional essay contest on St. Sava values, organized every year for all elementary and high schools in Serbia and the Republic of Srpska. On January 27, every year, the Society celebrates its Slava and the results of the contest are made public. Winners and their professors participate in the ceremony together with distinguished guests and members and receive awards in different categories.

Organizing different meetings that have education and enlightenment, as a purpose is also an activity of The Sveti Sava Society. For example, such an event was a round table “Faith and School”, a dialogue on religion instructions (veronauka) in Serbian schools, with many very important representatives of the Serbian public life, including ministers, bishops, rabbis, and Moslem and Catholic clergy.

The modern Sveti Sava Society observes tradition in the publishing sector as well. Seven issues of the review Bratstvo were published up to now. Top authors from Serbia in different fields of science and literature made their contributions to the review. Besides, the most comprehensive Anthology of literary works on Sveti Sava was published by the Society, as well as a number of different books including “The Sveti Sava textbook” (Svetosavska čitanka ) of Dr. Miodrag Maticki and a Small Anthology of the best student essays from the Sveti Sava literary contest.

Every year, the Sveti Sava Society takes part in the Belgrade International Book Fair and presents its publications with pride.
The Society nurtures very good cooperation and exchange with the Cultural Club Sveti Sava from Prijepolje and with some other cultural institutions in Serbia.

What is to be expected next from the renewed Sveti Sava Society? The most important task is to stabilize funds and revenues. To date financing was the limiting factor of the Society’s activity. Private donors and fund raising would assure stability and planning and this is what we need today.

Another task for the Governing board is to broaden its ties and cooperation with the Diaspora, everywhere where there are strong Serbian communities and, especially, clubs and societies named Sveti Sava. We can give valuable intellectual and logistic support to the Serbian Diaspora and expect to receive, in return, intellectual and material support.

The Fight for the restitution of property, once the Law on denationalization is adopted, will be crucial for the future of the Sveti Sava Society. If we are succesful and get back our real estate, the Society could develop a much broader and more meaningful activity in Serbia and in the Diaspora as well, including scholarships for young Serbs outside Serbia.

However, members of the Sveti Sava Society will not wait for all favorable conditions to be fulfilled in order to continue their work. In the last ten years, they proved that Sveti Sava’s spirit of good will is decisive for success. They will continue in the same spirit, and they will be more than happy if more Serbs embrace the mission of cultural and educational renewal of the Nation. The more we are together the more we can achieve. 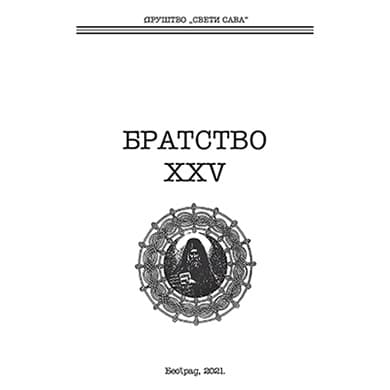